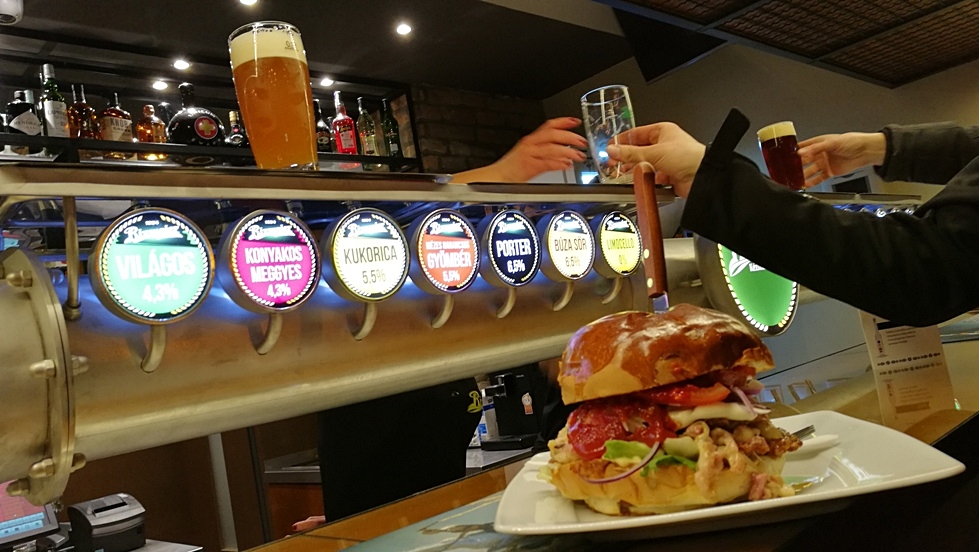 Three good news at once! The Rizmajer Beer House in downtown of Budapest just opened! Good news nr. 1: Now, we can get the good Rizmajer beers in a wide selection in the city centre too. Nr. 2: the transformation of the temporary infamous District Eight into a cool pub quarter got more intense with the help of this solid new candidate. Nr. 3: here is a further brasserie in Hungary that takes providing decent pub food for granted. Rizmajer is the name of a brewery operating since 1994 in the 21st District of Budapest which is actually an island – called Csepel – on Danube river. This brewery belongs already to the older generation of the current “craft beer revolution” of Hungary. They produce several types of beer. Besides the more traditional basic ones, they are also experimenting with new more revolutionary products.

The new “Beer House” in downtown offers constantly 7 basic Rizmajer beers on tap while the supply on the other 6 taps is changing time to time. Already on the opening party we could taste some unique pieces: black cherry beer, smoked porter or a double IPA called Popcorn. We also celebrated here the comeback of an other popular brewery from the Hungarian countryside. Their name is Hopfanatic. Their current new gipsy brewer product was the NoHopLimit Sicilian Edition, a remake of a formerly beloved IPA, now with additional Sicilian orange flavor. From the basic Rizmajer beers my personal recommendations for newbies are the Konyakos Meggyes Sör (sour cherry beer with additional cognac – a traditional taste combination for Hungary in the sweets industry) and the Cingulus Fekete Porter (black porter).

Besides the great selection of beers, in Hungary is especially important to have better pub food in as many pubs as possible. The new trends are promising, even in this area where Krak’n Town Steam Punk Saloon (opened last year) offers rare English Pub Food and few streets away Kék Ló (moved here one year ago) has vegetarian food next to the drinks. On one hand Rizmajer Beerhouse has some of the default pub foods on the menu but in good quality such as big hamburgers in retro buns or crispy grilled sandwiches. On the other hand they also have some quite particular pub food choices for the guests like Wiener Schnitzel and beer house “kenyérlángos” (sort of Hungarian foccacia), grilled cheese, Viennese potato salad. The owner and the of the place and the brewery József Rizmajer told me that he was thinking of his father in law when he put Wienerschnitzel on the menü. He used to ask for it all the time whenever they stopped by any place to have something to eat. First of all I tried cheeseburger with bacon. They do it on a unique way creating a melted medley from the cheese and the diced bacon. When this magical material slips out of the bun makes our food look like spectacular burger-jelly fishes. photo: (not proudly but:) Pubtourist

Lets talk about the location, too! Grand Boulevard can be considered as the most important lane of Budapest. Only on Pest sides it runs through 6 different districts and has two 0-24 tramlines. In the last years the 7th district part of it became very crowded of pubs and this trend haven’t stopped yet. These pubs (many of them are Hungarian franchises) are mostly popular by the students and young people. With very few exceptions they rather sell large-scale beers. The District Eight was an infamous area of the Hungarian capital for decades but recently it definitely started to grow in popularity. The residents are changing, more and more people move here gladly, a new metro line opened three years ago with four eight district stops and there are many developments and renovations all around. It’s very good to see how these streets started to blossom and to witness how this old, historical and very central district restores its old fame. Lately also the gastronomy and nightlife started to improve here, exactly on Grand Boulevard and the streets beyond. It seems that the Seven Districts trends don’t continue here. Rather unique places are opening which are focusing more on pub food and craft beers. We have already a nice selection of places to go. Also József Rizmajer feels passionate about this area. For him it was no question to open a place right on Grand Boulevard where all the people can see the place and the logo when the tram is passing by. Despite many people would have advised him to join the District Seven pub carneval, he intentionally moved into the “Eight”. He also encourages the fellow brewers to open a place here to turn this area into a default location to find the best craft beers of Hungary. We’ll see what the future brings but now we have a new place to visit for sure.

The Rizmajer Beerhouse on three levels is intended for many occasions. It is good enough to jump in for one small beer and think about your day in the causal entry or have a chat with the simultaneous fellow drinkers. Upstairs it is good enough for bigger companies to gather or downstairs for more intimate meetings. On the upper level you also have the chance to tap the beer yourself on three taps in a prepaid system. The appearance is nothing extraordinary but it is classy and comfy enough. You can sit in boxes or on leather sofa if you feel to or on a wooden bench like in a beer festival if that fits your mood. I like also the light fittings created of beer mugs or cutted beer cans. All the rooms are spectacularly illuminated, especially the caracole stairs in the middle. Also the trademark represents itself on the wall proudly and strongly expressive. Further features worth to mention are: first the high tech cold store for the beer cans in the basement which cools down the tap beers one by one and delivers them to the beer taps always freshly. Second the guest fridges from which you can take home all the beers in bottles, in different sizes on and good prices. The customer-friendly prices are generally characteristic of this Beerhouse. They are the perfect middle ground between the mainstream large-scale beer taps and the high positioned beer specialities. It is very good to have them and have them here and have this way. Good luck for the future!

← The opposite ends of Lake Balaton #1: Keszthely Instant goodbye from Instant →