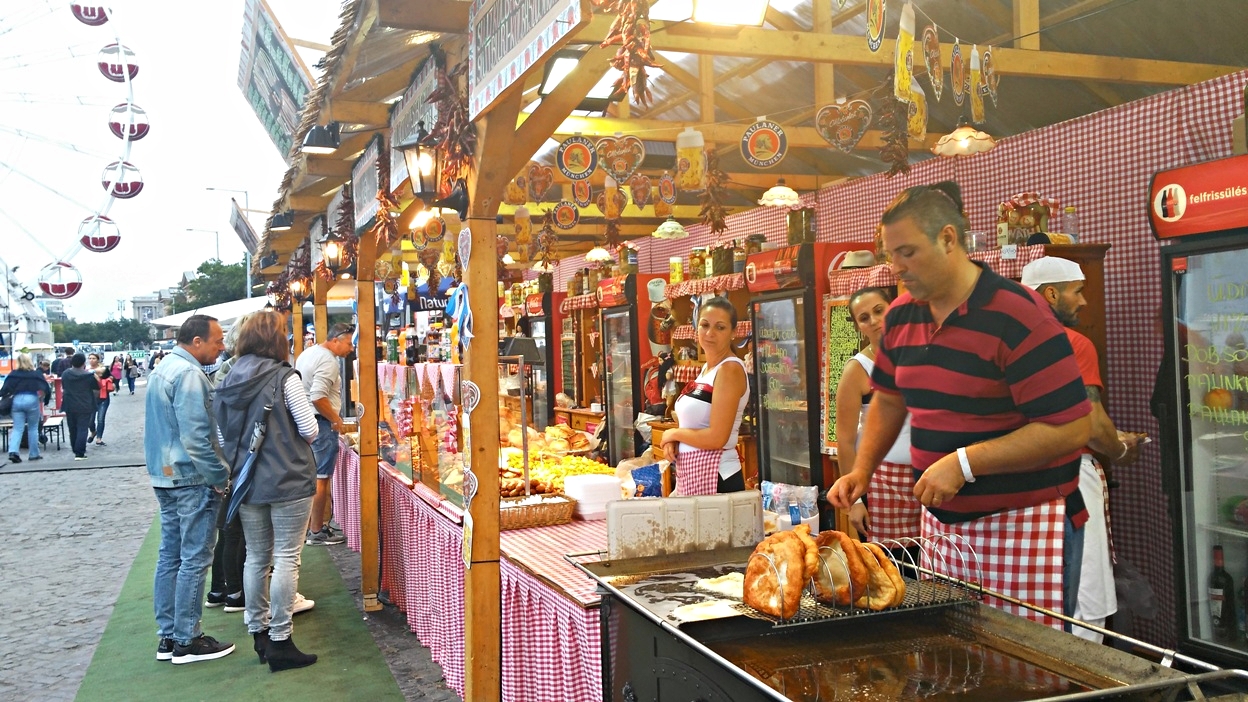 Oktoberfest in Munich missed, but Oktoberfest in Budapest checked, once again this year. Last year’s occasion was my first time. I did not count on the tickets to be sold out already on Saturday, and after my friends had no luck on getting theirs, I decided to attend on the „grand finale” on Sunday instead. I was quiet curious on the improvements compared to last years festival. The scene was the same, the “gate” of the Budapest City Park (56-osok tere, Városliget). The first very eyecatching difference was the „Eye” of the festival. I really enjoyed watching one of my favorite modern buildings of Budapest in the background, the ING headquarters, designed by Eric Van Egeraat. Compared to the full house on Saturday, the crowd seemed surprisingly small, but as I circled around, I realized there were a lot of people, it was the scene, that was so big, that you could not tell at first. So good news, for me on long queues and on the usual, festival-like tripping over each other. My only sorrow was, that even though the festival’s gates should be open until midnight, a significant number of the participants have put down the shutters by 10 PM already. Of course most of the visitors went home either at this hour, although the most people came for the evening and the early night hours only. Reading the comments of others, some of them have found troubling, that the variety of the offered beer brands and foods didn’t match enough to the original German festival assortment. To be honest, I have never been to the role model festival, so I can’t tell how thight the supply of the German one held on to their traditions, but in fact, the Hungarian selection of foods and drinks was not limited to beer, pretzel and Bavarian “Wurst” (=sausage)

also our traditional drinks were presented to the audience, like pálinka, Unicum and spritzer and the wines from Hungary’s most popular wine regions, there were reminders of the German culture, like Hacker-Pschorr Märzen, of course and beautiful beer mugs like this could be bought at the festival, but the famous currywurst got to share its light of fame with the gyros at this stand, which gave me the epochal idea to mix the two in one box: vegetables, gyros meat, currywurst, mustard and horse-radish. As the staff was supporting my outside the box thinking, I could get a brand new street-gastro experience thanks to them. If you would ask me how I liked it, I would say, a lot! If anybody would have the bravery to base a new foodtruck on this idea, they would have me immediately as their first real regular.

I really needed the specialties, as when I bought my ticket online, I have tricked myself into a discount menu “Frankfurter”-Borsodi beer (one of Hungary’s most basic large-scale beer) menu, which could have been good, taking its price-to-value ratio into consideration, and also keeping the fact in mind, that this product may never existed at their advertised original price in the „special offer”… I would have never bought it on my own, would they have not offered it online to the ticket, and would I have known the detailed menu in advance. Lesson learned! But with the street-food-wonder I created I have well compensated my taste buds, which were quiet satisfied with the flavor tsunami they got.

The German culture was represented on the beer front as well, but even though I did not carry out an official study, I could tell, that the Hungarian beers were making the majority of the hops beverages, which fact, I was not at all bothered by. Besides the conventional Hungarian beers I was able to spot some unusual and new participants as well. This years newcomers, like the Budapest beer, the APA of Soproni and the love child of the Brewery of Szent András and Csupor; called the „Bandibá” (Uncle Bandi).

After the opening of Ogre Bácsi pub, I was pleased to see the crew of the brewery of Békésszentandrás as good old friends, even though I got to know completely new people in their truck. Along with the Hungarian and German beers, you could also find some juices from other countries, like Belgian and Czech ones, but I skipped them this time too. All in all I liked the scene. I don’t mind not getting a traveling circus from Munich, because they made a well mixed medley from foreign and domestic traditions.  If you want to experience the real German deal, you still would have to go there. The price for the ticket, considering that concerts were included (I really liked Charlie, I may go to one of his big concerts on purpose sometime in the near future!), is not more so expensive compared to other festivals, where you have to buy a beer mug as entry, but it was not cheap either.

It’s the festivals scale and atmosphere, that is much more different, compared to the other small free entrance festivals. The party at Főzdepark with is familiar and friendly scene is the other end of the scale. You can choose your personal favorite!

I am very pleased to have this festival on our own, and I keep my fingers crossed to see it grow and improve even more, but also for remain this much Hungarian. It’s October and it’s a Fest’ – so were is the scam? So I would make it without the international street food and the third party beer brands, but the Hungarian wines, spirits and foods don’t bother me at all, until the beers, the wurst and the carnival stay under the headlight.