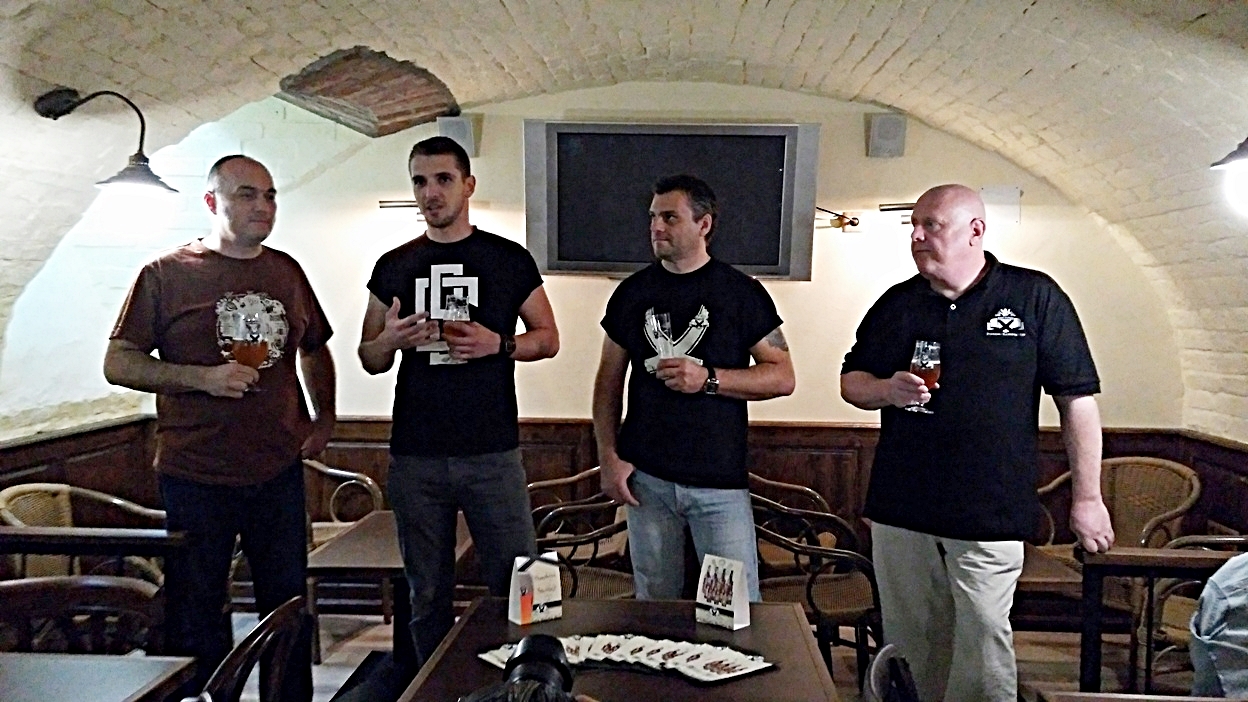 The prophecy of a brasserie of Szent András brewery was my only comfort, when the Hopfanatic Pub returned to his origins (Kiskunhalas) from Budapest. I had the feeling that the small beer cellar in Hunyadi square will be treated well by the successor. This theory was based on quite flimsy grounds at first. My only motive was the fact, that I love the „Fekete” (=black) beer of Szent András (=Saint Andrew) brewery. I should be the one to know that one good beer alone could be enough for one good refrigerator, but not for a good pub. So, the day has come for the rest of the features to stand by it and prove together. On 23th of September Ogre bácsi (=Uncle Ogre) opened his gates.

The entrance welcomed me in positive, happy colors, matching its environment, the colorful, beloved Hunyadi tér. The older Budapest pub crawlers still recall to this place the old and famous Rock Randevú bar. I just knew the direct forefather.

-What will happen to my preferred wall paintings – I asked the Kiskunhalas guys right after hearing about their escape plans. I liked their graffiti style. They couldn’t knew the answer. I went down excited to the opening. As it was predictable, the walls got repainted, partly to ogre green. This was something to wink at, even for me. I could adapt that this is a new beginning, a new era, a completely new pub. Enikő from the Szent András team even told me that the walls won’t remain too long this sterile, like on this “news conference”. On one hand the new decoration will refer to the original pub of the brewery, in their hometown, the South-eastern Békesszentandrás. On the other hand it will be based on the personal cult of Ogre. He will be shown in different emblematic situations on edited photos on the wall and with some objects. I can’t wait.

If you would ask, who Ogre is. This guy: He is (lets create new words:) beer label celebrity, but in addition a beer brewer, beer expert, the godfather of a beer and from now on the manager and the occasional bartender of this pub named after him. We can literally say, the place has a character.

Is hard to judge on an opening party, how a pub actually will become in the future, but the attitude is compelling. The brewery staff interacted cozy and friendly with the public. At some point they lined up to tell about their plans, background, history and actualities.

I am happy, that they came, also for personal reasons, because few years ago, when I also realized sluggishly that we have a Hungarian handcraft beer revolution, I tasted their (that time still) Fekete korsó (=black jar) beer among the first ones, on the Figaro terrace. I constantly told everybody about it, that it is a grandiose feeling, we have something new to be proud of. I took it to house parties and pushed to foreigners to try if if they want to have a good beer in Hungary. Since that the new beer supply spreaded in my conscious as well, and many times I get lost in this maze, but I will always remember the first ones. Békésszentandrás is a desired location, pinned on my travel map of the future, but I cheered them from the beginning to open a Szent András brasserie in Budapest as well. Now we have one! On at least of seven taps from ten, their beers are running six days from seven a week. But on Sunday even the Ogre gets a rest.

The fridge is full with various Hungarian handcraft beers from here and there, and guests beers are coming frequently to the remaining beer taps. The opening was a beer debut in the same time, a cooproduction was introduced with Marci Csupor from Csupor beer brand, who was also well known figure in the Hungarian beer circles. The beer is called Bandibá (=Uncle Bandi. Bandi is a nickname to András, the Saint from the name of the Brewery), an American IPA. It has a sharp, remarkable flavour. This dangerously 7% strong sort of beer is to drink and like easily. At first sips it seems to be lighter as its effect. The presence of the beer snacks was a relief. The pub presented their future bites, which are mostly goodies from the county of the brewery: békéscsabaian sausage (<another favorite) and literally handcraft pretzels from Mezőtúr, rolled by old ladys with theire own hands. The spirit (pálinka) of the house comes from this area too. Because I am a known patrol of the good pub food, I can tell that I got the anticipated extra feature in Ogre bácsi besides beer to earned my trust. I also was caught by their intention to have a monthly blogger meeting in beer thematic. It will be a beer revolutionist spot – that’s what they said.

I wish them very good luck!