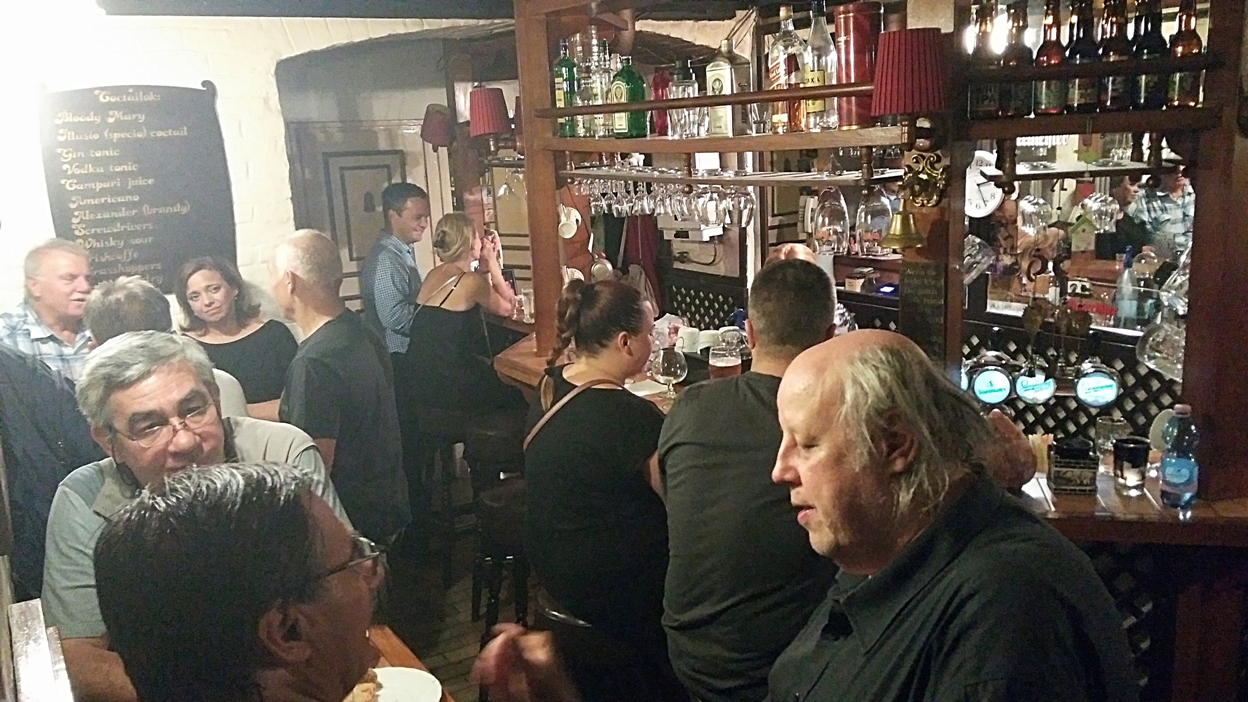 In case you would ever wonder, Illuzió became one of my favorite pubs of my entire pub crawl. I had this deal with you and myself, that I don’t rate the pubs. But I let myself pick my own favorites. Illuzió realized the Utopia of the Hungarian pubs for me. If you as en expat or a tourist want to go to an authentic one, choose this as a destination. Lets have a look why:

I discovered Illuzió coincidentally and it was love at the first (outside) sight. It had this authentic aura, situated in the most hidden part of the long Attila road in the First District. This is a spot, where most people would go only on purpose and rarely would pass by. I added Illuzió quickly to the top of my bucket list and fortunately my good feeling about it wasn’t just an illusion. The great community pub experience hit its highlight here, in this bar so far. I went there first in March, 2016. Kati was behind the counter. She debuted as an excellent representative of her role. I didn’t even had to ask, for the first pub-compliment she started to give me a history lesson of the place: she works here for eleven years, the pub exists since 1987. If this was 28 or 29 years, in the time of writing this lines, she got into a fight with one the regulars, Gyula. He is a 65 years old, retired engineer. I got to know him as a bright, communicative man with an especially good sense of humor. I also mark favorite regulars and he is an award winner in this matter. We encountered and talked multiple times there since then. At this first occasion, his friends were just leaving, but he stayed with me, Kati and all the others around the bar, ca. 6-7 other people. I invented the phenomenon of the magnetic counter there and then. Still there is a free place at and around the counter, the guests fill up those, and the rest of the tables and rooms come only after. And we speak about a quite big pub, with more rooms, even separable, intimate ones. In the later added inner rooms women could get pregnant without making the other guests outside even notice. But these rooms remain frequently relatively empty despite the normal amount of guests, because it is so good to be outside. In these back rooms there are sometimes wedding anniversaries or class reunions. From the four premises the oldest, smallest one, where we enter is like the kitchen in a house party, the scene of the biggest buzz. The guests rather stay standing, just to be in the epicenter. It seemed to be the most natural thing here. Kati was proud of an entire army of regulars. Many people return more times a week and everybody brings the new ones. This is how a pub is able to blossom also in the hidden shadow of the surrounding main road lines. According to Gyula, the people who are coming here, don’t jiggle for the alcohol. The public here is an alcohol lover, but not alcohol addict. He used to come here even before this place turned into a pub. It was a shoemaker store back then. Quoting Gyula, since Mr. Mudrai doesn’t fix his shoes anymore, he brings them only on foot inside, since Illuzió opened. He lives in this area like in a village of 500 people. He went to school here, he met his wife here, he raised his children here. The most natural thing for him is to come here to pub, as regular.

– Every single stone around has history for me. There is no building here without a connection. My family doctor used to live her, aunt Rose used to live there, I used to buy the milk here, my father had his home there. It gives peace to the mind to hug the whole neighborhood in my soul.

As a vagabond, I have the chance to get this type of experience only through the words of others, and that’s why I appreciate them even more. Gyula’s thoughts about Illuzió: “this isn’t a pub, this is an intellectual workshop.” I heard only interesting, quality conversations indeed, but after a while they turned into a common singing. Only Hungarian songs were played by the radio, the ones known by everyone. That time more generations sang them together. Kati danced behind the counter, Gyula on the other side, both of them in the cool way. I hate the song “Petróleum lámpa” (=kerosene lamp) since the field trip in the third grade, but here I joined the singers anyway. I never have liked it that much before. And meanwhile such wisecracks flow in the air from Kati to guests like: “you act as you wouldn’t be at home here” or “we live together for five years, don’t we?”. When I said to Gyula, that for this place we should introduce the six star category, he hit me in the back and said: “now go home to rate!”

On this March Friday night Illuzió became one of my favorites forever. I returned gladly several times. Since then, I got to know Anikó, the other bartender. She – with her sense of humour , kindness and coolness – became the second half of a legendary duo with Kati. Both are trademarks among the bartenders, but lets see the other features too!

I was pleased with their traditional Hungarian grilled sandwich, their homemade cracklings, I played table football and darts, I had good conversations, I learned a lot of new things about the world, I coincidentally broke two glasses but wasn’t grounded for it, I watched here the UEFA. I was present also when there was a birthday party in the inner room for younger people and they listened to their own music, while the radio was playing Hungarian classic records outside. The peak experience for me was a birthday and name day (Hungarian habit) party at once were I was also invited. There were delicious bread slices with pork crackling spread and kőrözött (Hungarian style spicy cottage cheese).  Hungary suddenly turned into a Hungarian-flavored Italy. Like those would have been aperitivo plates on the tables. They called them simply welcome gifts. I attented to the bar’s own birthday party too, with much more surprisingly good occasional pubfood-goodies made by Anikó, cake and singing. Furthermore, there are preferable beers on tap, four types of Staropramen. They have pleasant housewine for spritzer and delicious pálinka. The interior is homey with brown colors, chalky white brick walls, and an antiques collection, which are not treated as sensation like in the ruin pubs. You can find a lot of nostalgic objects here, from which a trend-following pub-commander would build a huge ruin-pub idol in the middle of the pub, but Illuzió puts the objects, where they originally belong, on the shelves and in the cabinet. Another red mark to them that most of the metal retro posters are of Hungarian thematic. We don’t even need more, but all this together and in this amount is rare. You can go after. I am going after constantly. And there is another extra feature: safety. Once I forgot there one of my hats, and I went back for it only one and half week after. Some of the guest realized that it is mine, others wondered where this new decoration came from. But all of them left it there, where I did, on the hack, in the guests area, in a capital for one and half week! Just like I would left it at home.

The hat isn’t the only thing what feels like home. Guido is a 22 year old regular and according to himself, he is one eight or one sixteenth !!! part Italian. He comes here most gladly. From his this friendly sphere is more important than anything. He doesn’t want to think about it, how much he must have spent here in the last years. Once he even rang the pub bell accidentally, which means he has to pay one round for the whole bar. He told me, that if Illuzió would close or change significantly, it would shake his entire world. Big words, but i feel them.

It is time to finish the tale of the Pubutopia with giving them the honor that this atmosphere can exist here, that regular guests can live be here like in a commune, even with 40 years of age difference. For goodbye, here is a picture of Illuzió from 1989: ← Oktoberfest, Budapest 2016, Bits and pieces FASOR Espresso – A „pubmuseum” built around the most surprising cash tray of all →