Home » HOW IT ALL BEGAN – The second station zero: Borpatika, Hévíz

HOW IT ALL BEGAN – The second station zero: Borpatika, Hévíz 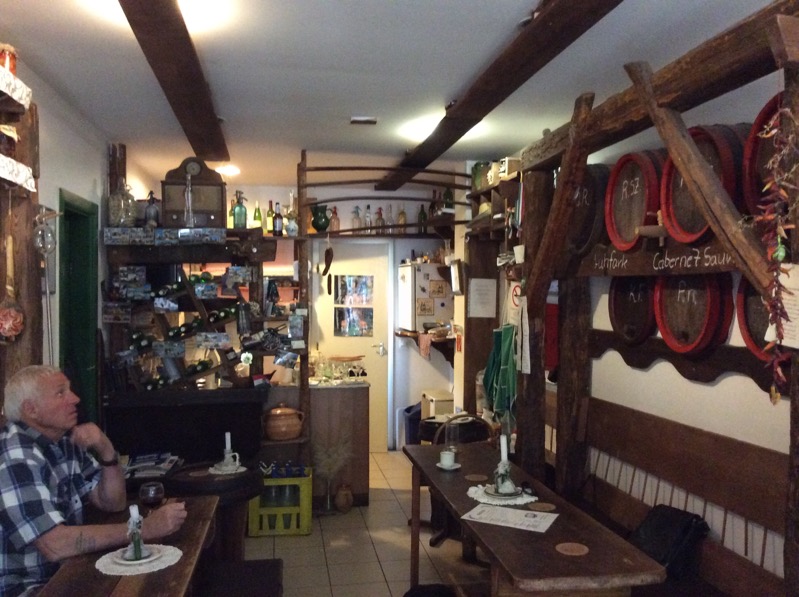 One day after I said goodbye to Maxi bar in Opatija, I was in Hungary again. I was travelling to Zalaegerszeg through Hévíz, but I missed my connection. I won one hour there. I went to look around how the second most commercial guest nights counting Hungarian settlement was developing since my last time there. The town is best known for this thermal lake and bath: It became tidy, on the good and bad way too. I didn’t wanted to stop at one of the super thermal-tourist coffee terraces, despite the pleasant sunlight there. As I loved the fake-rattan chairs when they started to spread, so became they signs of not enough fantasy for me when they got overused. (But who knows, maybe they were the first ones using them.)

I had to hold on only for a little while, because after few corners a small backstreet wine bar, called Borpatika (it means wine pharmacy) caught my attention. A middle-age German couple sitting on the terrace welcomed me with a big Guten Tag. Inside I found super atmosphere: the bartender was surrounded by guests in Jesus and disciples choreography. The quite newly built condominium, where the wine bar was, revealed that it can’t be as old as it seems, but they really succeeded in creating a climate of a decades old conventional place. It was an especially clever solution how they playfully hid the modern ceiling spotlights behind the countryside like fake ceiling holding beams.

In 2014 a very sympathetic host couple took over the place. I met the husband, Gábor. They changed all movable parts of the furniture (everything not from wood) to traditional Hungarian style. There were a lot of things to examine: calabashes, butykos – the Hungarian time-honored pálinka bottle (mostly ceramic), scrip bags, barrels and decorations made of barrels – these lasts were presumably pieces of the heritage, because they were made of wood. So basically they upgraded good basics to even better. In the time of the previous barkeeper – the still legendary, likable way furious Szaniszló, who – rumor has it – kept a military discipline in the place, there was a cap collection on the wall (for example military caps.) According to the guests Gábor has a definitely different style, than Szaniszló had, but although it is far more adaptable, it is far not glad-handed or sharpless. On the contrary quite humorous, even provocative till the pleasant level. He has few nice words to every guest. For those whose language he barely speaks, the few words he can say are surely nice. He speaks good German and he is talented in making a difference between the Slavic languages after listening to them.

After I asked for my coffee and my fröccs (spritzer in Hungarian) from the local olasz rizling (famous Hungarian wine type), we started to have a conversation with Gábor and the guests. In these moments he started to GREASE a fatty bread (Hungarian specialty), then slice and decorate it. The result looked like this: It became really homemade like, with red onion, green onion, grounded green pepper. I realized, that he is making it for me. I told him to stop, because I will have my spritzer and I’ll leave immediately, I don’t deserve this countryside gourmet. He replied that in his pub, whoever drinks only one beverage, deserves this.

After this gesture, I thought, that I don’t have to leave my country borders to find something like the strong Croatian hospitality. I can find this in Hungarian form too. I got my second kick to start a pub-crawl blog once. I returned here consciously as 327. station of my tour, after 10 months, but that time I intentionally spent two and half hour here.

← HOW IT ALL BEGAN – PART ONE: The first station zero – Maxi bar About the pubs, honestly, as an adventurer →

4 Replies to “HOW IT ALL BEGAN – The second station zero: Borpatika, Hévíz”