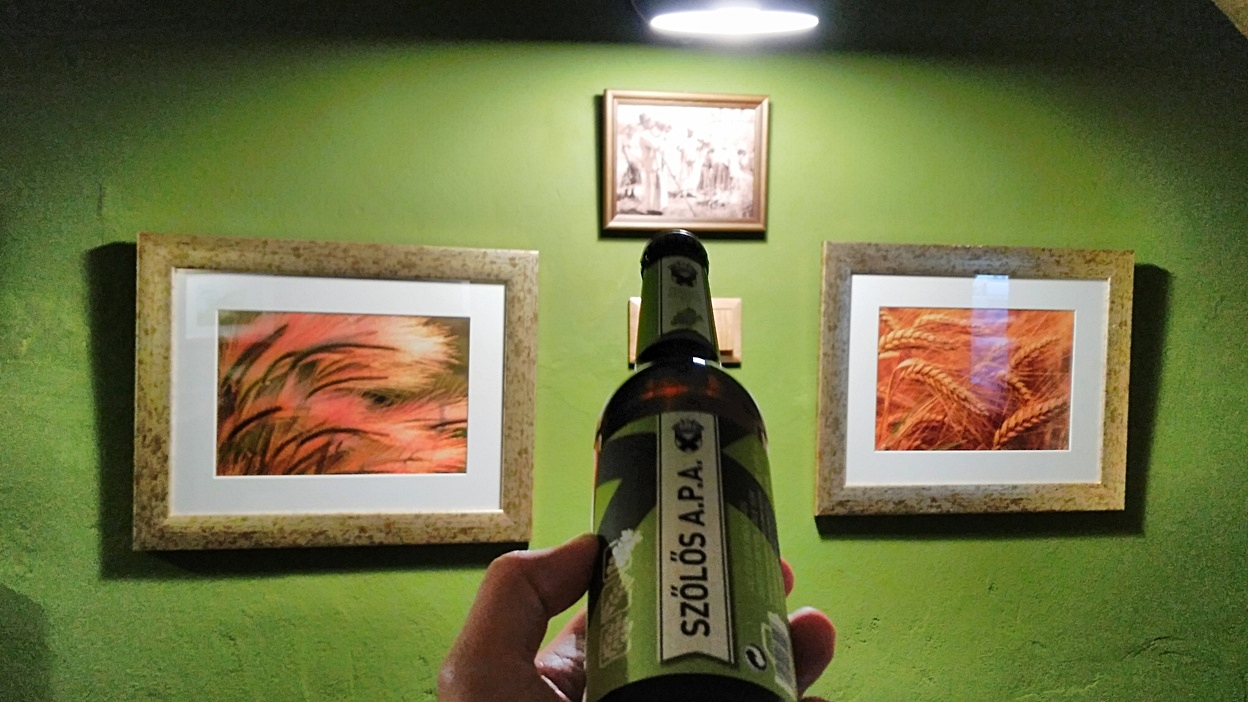 I was pleased to be invited again to Ogre bácsi (Uncle Ogre) brasserie, to the Budapest headquarter of Szent András Brewery. For the grape harvest season they came up with a grape flavored APA (American Pale Ale) beer, which is not intended to be a seasonal specialty, but a permanent member of the supply. For this reason before the brewery fix the recipe too much, they expect the opinion of the guests. Besides my taste buds I also prepared my eyes for the second visit to see, how the pub is running and how it developed since the opening event one month ago.

A member of the brewery, László Bukovinszky introduced this time alone to the public the newcomer beer, that they simply named Szőlős Apa (=Grape flavored A.P.A.) This product already has a past after a first experiment last year. But based on the feedbacks they placed the beer on a new foundation. Szent András Brewery has already good references in fruity beers, so they were not scared of the challenge.

Let’s see if there’s any veritas in the vino also in a grape flavored A.P.A.? In my opinion, it’s tasty and it didn’t confirm any of the fears may arise. Not as sweet as a juice in a cartoon paper box, and it didn’t become too winy either. It is definitely beer above all, but from the less bitter kind. I could drink it at any encounter, and am sure that I still will, but it didn’t shake the podium under my personal top 3 Szent András beers: the Fekete (Black), the Betyár király (Bandit king) and the Bandibá’ (Uncl’ Bandi).

The twist in this tale – besides that they borrowed the grape from the wine for the beer – is the fact, that they despite the frequency of lager based fruity beers, they intentionally pimped an ale type of beer. They offer it as an entrance ticket to the world of beers for those who didn’t feel like a beer type of person so far, but still would like to have a try. For these beginners the The Betyár király or the Szent András könnye (Tears of Saint Andrew) would be a too big step. In addition the brewery would like to present this beer also to the beerlover/beerexpert community as a pleasant novelty.

Using Hungarian fruits is an important part of the conception of Szent András Brewery, that’s why they chose the concentrate of Tokaj (Tokaji aszú is one of the most famous Hungarian wine type and Tokaj is a Historical Wine Region), which was added posteriorly to the beer. According to László the unification of the beer and the grape is a quite difficult process.

The alcohol percentage isn’t a Radler level of course, it is 4,9%, so drinking it you can really call having beer. They don’t guarantee that the potion will always remain the same. They are ready to change the formula, according to the feedbacks, which they directly ask for. On the premier day they provided free tasting for the incoming guests.

Guests buy the way…! They pleasantly filled the place this time. Nice to see this! I already experienced the presence of recurring guests, too. While we were listening to the introduction, I heard an other “uncle” coming in and asking for the „usual” from Uncle Ogre. I left a crowded pub behind around 7 PM on that Thursday. There were duos, trios, foreigners, oldies, middle aged people, youngsters and a significant number of girls. The sausage dish was on the agenda as well. It seemed to me that, they did it. They look forward to some trials and challenges, I’m sure, but also a bright future, if the keep this direction. First I missed the promised Ogre cult montages from the not any more empty walls, where I found only old photographs about the beer making in Békés county, pics of barley complementing the color of the wall, and some classical retro posters. But they reassured me saying that the Ogre montages are on the way actually, and they are closer to appearance than one month ago. A new beer is coming up in December, maybe the new design as well, so I am looking forward to it.