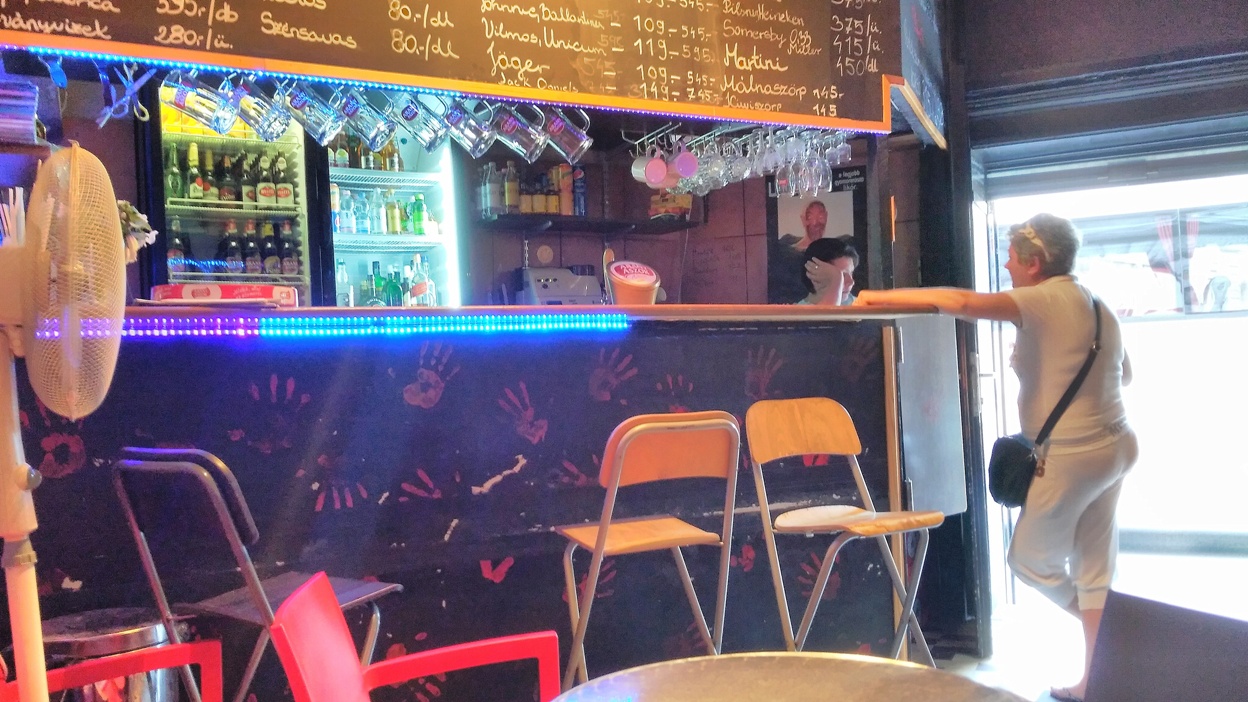 (after after three visits)

The very first spontaneous stop of my tour was a small pub, called Halász (outern-Erzsébetváros, VII. district, Budapest), in this retro crossing, with such cool blue painted barrels as terrace: Here I had my first Karikás pálinka in my life. By the first sip, I realized that I’ve had here a coffee once. That time I paid attention to my company. This time I looked around with more attention. It is funny, but the opening scene of my tour wasn’t really my type. I returned twice to have a coffee and taste the atmosphere again. The basics felt the same, even though the overall picture got a bit more complex.

It was an honest, cheap pub, but the clientele seemed to be signifaicantly too intense and too loud at the first sight. Being there in the beginning was like sneaking in into the lost control end of a teambuilding as an uninvited guest. You just wait for getting caught and get all the unpleasant guestions, who you are, what do you do there, etc. But no! For the second sight they were quite adaptive. I was sitting there as an already experienced pub tourist when I had returned intentionally, and I didn’t run away. On the contrary I nestled myself to the counter and drank my coffee with slow sips and loud questions. The bartender lady’s attitude was a big help to reduce the feeling of strangeness as much as possible. She was kind and chatty. Because they don’t serve any real pubfood (except snacks on the upper shelf), she helped me out by directing me, where I can have some good bites in the neighborhood.

Before and instead of any too sudden conclusion: by my third visit a regular stepped in with a huge, cheerful smile. He was younger than the seemingly average age (50-70) here and he drew a big circle with his hand into the air and yelled: good afternoon to everyone, I haven’t met yet! – That made me smile too.

By the way, this is typically the place, where someone should be in charge everyday to report the currently missing people list at the counter. The regulars count so much on each other’s obvious presence. Somebody came in and and went around with shaking hands with everybody. I got myself one too. I even was invited to play pool with the guests.

I left behind my previous impressions of the too closed community. The late afternoon publife around the pool table was blossoming. The regular with the great greeting started to play airguitar and started to sing with the Jukebox, a traditional Hungarian rockband’s, Edda’s song. Someone else sang along with him and also the second bartender lady of my third visit. I don’t have anything against Edda, but somehow I don’t like when people sing it. Here it was a good match.

Meanwhile I adored the checked retro glasses hanging down from the upper part of the counter, also the optimistic aphorism in the toilette. It says: This is a nice day you will be the most clever today! Smile, because everything is alrig…

The more intended and conspicuous decoration elements I partly liked and partly not. I liked the retro floor, the old presso style metal-tables, the handprints painted on the counter, and the Vynl LPs glued on the wall. It could be a traditional Hungarian pub, but those international newspaper patterned wallpaper and the poster about a London phonebooth are so rootless here. It seemingly tried someday to match a kind of modernity but these don’t fit the environment nor the regulars. The name, Halász comes from Fisherman which is a frequent Hungarian surname. In the old times it was called Szépasszony (means pretty lady). I wish I could see it that time!

It isn’t from the devil, not even today. As pubsport, beside pool there is table soccer, darts in a back room, and also table tennis in the basements (which attracts also a young company to return, according to the bartender lady). There is still pub-quiz machine, jukebox, flat TV on the wall, so it checks many features beside serving alcohol. The beer on tap is only Arany Ászok, the coffee is Lavazza. You can always see people here from 7:00 Am till 10:00 PM, whenever I pass by with bus, and I am sure we never would get bored. But back to the start: I totally feel for the ones, who would turn around on the threshold. This place seems to belong pretty much to its regulars already, and it could be scary for sensitive souls. The “pretty ladies” seemingly avoid it these days. As conclusion there is only one first station on a pubcrawl, and for me, this was it, on 7th of October. After finshing that first pálinka, I went further to the second place.

← Dreher beer in all colors – III. Dreherfeszt, brewery festival 2nd stop, instead of Sissi Kávéház és söröző: Green Caffe and bar – A 90’s confectionerey on the carnival of pubs →